“Joe Biden is not a real Catholic,” was a common claim at the Pro-Life Life Chain event held in Longmeadow on Saturday, October 10th. Nicholas Patryn, a 17 year old Longmeadow resident who attends Imago Dei Classical Academy, a Catholic School in New Britain, CT, says, “The fact of the matter is, if you support abortion and you’re a Catholic, you’re not a real Catholic.” A nearby participant, a dentist who was uneasy identifying himself (due to his wife’s distrust of “any media,” a common theme at the event), echoed this sentiment saying, “you can’t be a Catholic and pro-choice.”

According to organizer, Mrs. Amparo Moran, a Longmeadow resident who has had multiple kids go through LPS, the purpose of this event is to “make people aware that abortion is horrendous.” This event, known as a Life Chain, is a yearly rally held at the intersection of Longmeadow St. and Bliss Rd., supported by Saint Mary’s and the Knights of Columbus.

Mrs. Laurie Philbin, the head of Faith Formation at Saint Mary’s, commonly known as CCD, attended this event for the first time this year, saying, “In [this] election, there’s a big choice to be made. We have a Catholic who is running for President who doesn’t care about the pro-life movement, he supports the so called ‘right to choose’, whereas the right to choose to kill babies is not a great right to be giving people.” Mrs. Philbin, a Longmeadow resident who has had kids go through LPS and has a disabled son, says, “We have people out there now advocating for aborting babies because they’re disabled. Why would anyone choose that as a criteria to find a life just worthless and kill them?”

Nicholas rebukes the popular argument that as a man he isn’t allowed an opinion on the issue of abortion saying he is “a former fetus.” “The lives are independent from the mother. It’s the mother’s responsibility to help that child flourish and grow, and it truly is an evil to kill a child out of inconvenience, which is the majority of abortion,” he says.
“Times have changed since when I was young, unwed mothers, things like that, it’s not a stigma, it’s not something where they’re shunned from society,” says Mrs. Philbin. She believes that their church is taking a step forward by being accepting to unwed mothers, and says that support is important to tackling the issue of abortion. She says, “Mistakes can be made but is a baby a mistake? No. 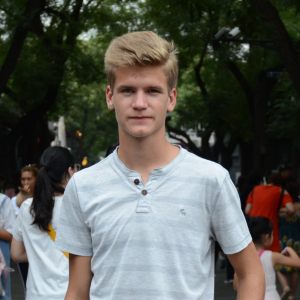 Success? Rather Domination by both Cross Country Teams this Fall

On February 5, LHS Junior Owen Dziergowski sat in a

When the stock market closed in observance of New Years’